How about some 'Literal' Food for Thought, People? 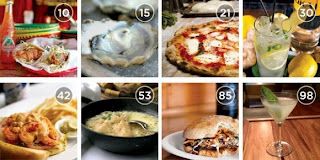 So the 7x7 magazine editors did an article called, The Big Eat SF: 100 Things To Try Before You Die. A little morbid in its choice of title, but I suppose it is not too far off from the idea of that book called 1000 Places To See Before You Die by Patricia Schultz. This article came out in 7x7 magazine's January '09 issue last month and was brought to my attention by several SFFoodMaven friends & readers. I thought it would be interesting to share with those of you that have lived here for some time and also for any visitors or newcomers to the City...

I myself have tried about 40 out of the 100 and I definitely have my work cut out for me. Probably a good idea in lieu of the life of leisure that I am living at the moment, but also a bad idea after the binge of last month's Dine About Town. Not a problem, I suppose, I just need to get myself to the gym.

I will say that I don't wholly agree with all 100 things, so there may be a few SFFoodMaven side notes for some of them.

1. Roast Chicken and Bread Salad at Zuni. Done. As much as I love Zuni, it's not my all time Fave Roast Chicken.

4. Spicy Crab and Grits at the Front Porch. Been to FP but have not had this. Need to go back...

5. Chasu Ramen at Katana-Ya. Done. Yum.. Goin back for the Kimchee Ramen

6. Burger with Fries at Slow Club. Done. It's pretty good, but not my Fave. I would ask them to go easy on the Mustard because it overpowered the Meat which is important to me...

7. Shaking Beef at the Slanted Door. Done. My Fave. LOVE it..

9. Tofu Soup with Kimchi at My Tofu House. Done. OMG, SO GOOD!

12. Salt-and-Pepper Squid at Yuet Lee. Done. Good, but I hear they are not like they used to be.

14. Beef Brisket at Memphis Minnie’s. Done. Not my Favorite though...

15. Oysters on the Half Shell at Swan Oyster Depot. Done. Like Hog Island better..

17. Tea-leaf Salad at Burma Superstar. Done. Awesome and different for most. A Must-Try for sure..

21. Pizza Margherita at Pizzeria Delfina. Done. Don't do take out, must eat there or it is not the same...

24. Blue Bell Bitter from the Cask at Magnolia Pub

25. Loaf of Bread straight out of the oven at Tartine (bonus: sliced while still warm and slathered with Brillat-Savarin Cheese from Bi-Rite, down the block) On My List...

28. A Gibraltar at Blue Bottle Café

30. Laughing Buddha Cocktail at Cantina. Right in my 'Hood.. On My List...

46. Chips and Salsa at Papalote. Done.

47. Ceviche at La Mar Cebichería Peruana. Done. Having been to Peru, I liked Limon's better...

48. Angels on Horseback at Anchor & Hope. On My List... Oysters wrapped in Bacon. 'nuff said.

50. Giant Pretzel with Mustard at The Monk’s Kettle. On List. I just love a good Pretzel and Mustard.

51. Maccaronara with Ricotta Salata at A16

54. Spiced-Chocolate Doughnut at Dynamo Donut with a Four Barrel coffee

58. Absinthe Daiquiri at Jardinière. Sounds interesting... and could make for a very interesting night as well...

61. Crab Soufflé at Café Jacqueline. OMG! Definitely on My List...

63. Meatballs with Grapes at Aziza. Vaguely recall having this when I ate there once...

68. Irish Coffee at the Buena Vista Cafe. Done. The Golden Nugget at Union Square does a pretty mean one too...

73. Popovers with Strawberry Butter at the Rotunda

74. Corned-Beef Sandwich with Gruyère at the Sentinel. SO on My List...

77. Eggs Benedict on the back patio at Zazie. On List. Sounds Lovely. Current Benedict fave is Curbside Too on California by Fillmore streets.

78. Chilaquiles with a Fried Egg at Pastores

81. Chicken Curry at Punjab Kabab House. Done. Not my Fave though. Like Aslam's better...

86. A Cheese Slice at Arinell Pizza. On My List.

87. Fresh Spring Rolls at Out the Door. Done.

88. Buckwheat Crepe and a French Cider at Ti Couz. Done.

89. Lamb Schawerma at Truly Mediterranean. Done. Like Yumma's on Irving better though..

92. Bacon-Wrapped Hot Dog from a cart in the Mission (preferably when you’re drunk). Done many, Many times... Once had 3 in one night.. No joke.

94. Mango with Chile, Lemon and Salt at Doña Tere’s cart (At the corner of 21st and Treat Streets, no phone)

96. Baby-Coconut Ice Cream from Mitchell’s. Done. But of course...

100. Cheese Course at Gary Danko. Done. Who wouldn't love it?

There you have it People...
So, what have You done?
And what would You do different?

You can click here for the 7x7 full article.
Posted by The Urban Food Maven at 6:00 AM