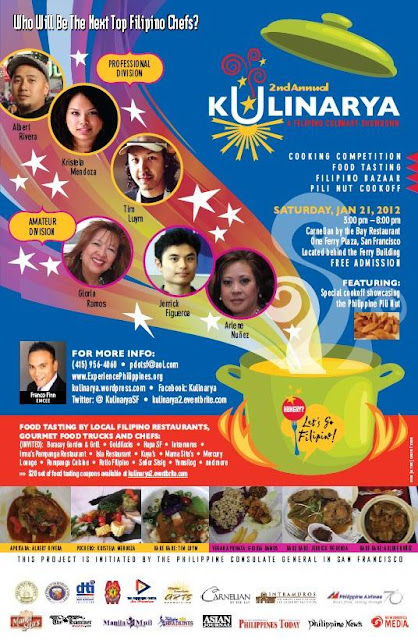 Yes..
She's makin' a comeback..
I've been asked to go to San Francisco to be a judge for a culinary competition at the 2nd Annual Kulinarya, a Filipino Culinary Event which is being held at the Carnelian by the Bay in San Francisco next Saturday, January 21st. The event is scheduled from 3 to 8pm and will feature tastings from various Filipino chefs & gourmet food trucks around the Bay, as well as a culinary competition, which I will be judging. The featured ingredient is the Pili Nut. Not sure that I've ever had this before but it will definitely make for an interesting time. And it free.. So if you're local, you should definitely come by and check it out or at least come hang out with me!
I'm very excited & actually honored that the Kulinarya event board found me in Greenwich CT a few weeks ago where I've been doing my thing at cb5 restaurant group. My job designing & constructing and opening new restaurants has not allowed me the time to write very much but perhaps this is the inspiration that I needed to jumpstart me...
So, come by to Kulinarya next Saturday and let's catch up! Would love to see you!

Posted by The Urban Food Maven at 1:16 AM