C.E.O. Women International Cook-Off at La Cocina in the Mission

C.E.O. Women, a non-profit whose name stands for Creating Economic Opportunities for Women, sponsored its first International Iron Chef Cook-Off at La Cocina in San Francisco's Mission District.  If you are unfamiliar with this non-profit, C.E.O. Women's mission is to help create economic opportunities for low-income immigrant and refugee women by educating them in English, Communications and Entrepreneurship.  The cook-off was a part of C.E.O. Women's program called Shine Your Brilliance, which celebrates the strengths and talents of these women and this particular event was held in support of women wanting to start their own businesses in the food industry, such as catering, restaurants and the like.  The four cook-off chefs featured were graduates of C.E.O Women  from these countries - Ethiopia, Japan, Mexico and Peru.

Yours truly was one of the judging panelists, representing, SF Food Maven & SF Bay Style along with three others - Caleb Zigas, La Cocina's Program Director, Donnalyn Murphy, Director of Educational Services at Golden Gate Restaurant Association and Thy Tran, Founder of the Wandering Spoon and the Asian Culinary Forum.  Chef Thomas Weibull of Plouf on Belden and the former Les Amis was the Master of Ceremonies and what a spendid job he did. 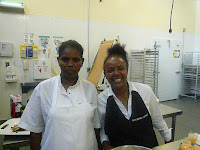 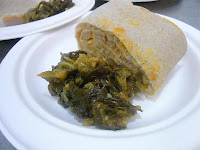 The first Chef contestant was Aster Andyhun of Ethiopia, who has been working with C.E.O. Women to start her own food catering business and plans to open her own Ethiopian restaurant and market, called Bole mini d'Afrique.  Her signature dish was Linton Sew, which is a popular everyday dish in her country.  Linton Sew is a mixture of yellow lentils, olive oil, ginger, garbanzo beans and garlic and it was spread on traditional Ethiopian bread, called Injera and served with a side of collard greens.  Injera is a spongy, sour flatbread that is also used as a utensil.  The spicy flavors of the Linton Sew went very well with the Injera and the side of collard greens added extra flavor and texture to make for a healthy and tasty vegetarian dish. 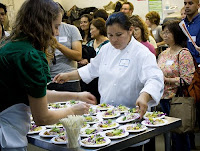 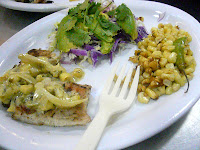 The next contestant was Dilsa Lugo from Cuernavaca , Mexico.  Her dish was Rajas con Crema (literally 'slices with cream'), which is a dish her mother taught her to make growing up.  The 'slices' in this dish were Poblano peppers, which added a little heat and were a nice smoky contrast to the cream sauce.  It was served with a flavorful roasted chicken and a side of cilantro & red cabbage chiffonade, which added beautiful color and contrast in flavor and texture.  Dilsa runs her own catering company called Los Cilantros, which she opened using the entrepreneurial skills that she learned at C.E.O. Women and with the help of a Venture Fund grant from them as well. 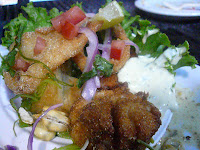 The third contestant was Rosario Cabrera, also known as Charo by friends and family.  Charo was born in Chiclayo, Peru along the northern Peruvian coastline and she immigrated with her husband in 1996.  Her signature dish was called Jalea, which is an example of 'plato criollo', or local dish.  Jalea is a mix of deep fried shrimp, lobster, shellfish and yucca, and it is served with onion, lemon and chili sauce, known as aji.  Charo is working on the design and name of her catering business and hopes to make the Jalea a signature dish. 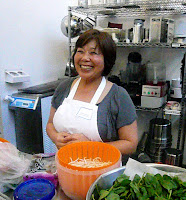 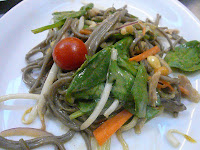 And last, but certainly not least, we had Meiko Raymer from Japan.  Meiko has lived in Panama and New Zealand as well and her cuisine is said to reflect her diverse experiences.  She made a Soba Salad, which is traditionally served cold or in a soy-based soup.  Her recipe includes watercress, cucumbers, green onions and pine nuts and it is mixed with a miso-based peanut dressing.  The unexpected combination of flavors made for a light and refreshing dish.  This dish will be the signature dish of her upcoming catering business called Hana Special Occasions.

According to C.E.O. Women, this was not a competition for just one person, but a means to showcase and celebrate these women's talents.  The four women are graduates of C.E.O. Women and this summer cook-off was an excellent way to get valuable feedback from everyday people and experts in the food industry.  There was no individual winner, because in the end they were all winners for all of their hard work and endeavors in starting their own food businesses.  And if their flavorful, well-executed signatures dishes are anything to go by, each of them are sure to be a success in whatever they aspire to do.
Posted by The Urban Food Maven at 5:18 PM