Yes, you heard right, and if you're a real Foodie living in SF, then you probably already know about it.
If you haven't then, here it goes... 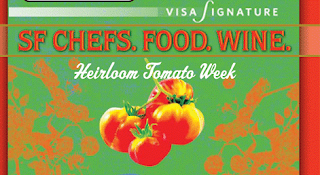 Tis the season of Heirloom Tomatoes and a collective of SF chefs and restaurants have joined forces to offer the Bay Area an unprecedented esculent endeavor called San Francisco Chefs. Food. Wine.  This is a year long event planned by a community of San Francisco chefs and restaurants, which is kicking off three seasonal promotions in the city within the next year.  The first event is Heirloom Tomato Week, which will be kicking off this Thursday, August 14th and running through August 24th and is in support of local tomota farmers.  The promotion features over 50 notable and popular Bay Area restaurants that have banded together to showcase local grown heirloom tomatoes in either tasting menus or signature dishes.  Some of the participating restaurants are Antica Trattoria, Bix, Fleur De Lys, Grand Cafe, La Folie, Piperade and Poleng Lounge.  You can make reservations for participating restaurants on OpenTable.com and if you use a Visa Signature Card, you will get a free commemorative book of heirloom tomato recipes, stories and all things tomato.

The next promotional events to follow will be a Dungeness Crab Week in January '09 and a Strawberry Week in April '09.  The year in celebration of seasonal food will then culminate with the event mentioned above called, San Francisco Chefs. Food. Wine.  A Weekend Affair. which will take place next year with a grand Tasting Tent at Union Square and will also include surrounding restaurants and venues holding additional events from August 7th through the 9th of 2009.

Sounds like a delicious line up if you ask me, so mark your calendars...  I've got it all in my calender already, you can count on that!
Posted by The Urban Food Maven at 12:36 AM